Go Back
–+ servings
US CustomaryMetric
0 from 0 votes 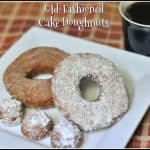 You'll be surprised how easy it is to prepare old-fashioned cake doughnuts, with hints of cinnamon and nutmeg. The recipe makes 12 doughnuts + holes!

The quantity of doughnuts made will vary, depending on the size of the doughnut or biscuit cutter used. Caloric calculation does not include optional toppings such as powdered sugar or cinnamon-sugar.