Cinnamon roll crescents are quick and easy to make! Crescent roll dough is coated in a brown sugar/cinnamon mixture, then rolled, baked and drizzled with glaze! 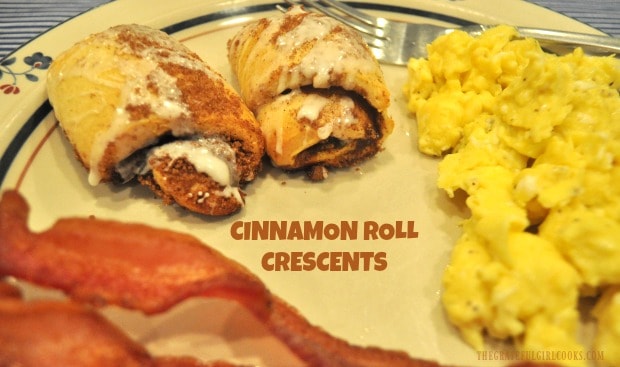 I found a recipe on Pinterest that sounded like a totally quick and easy way to have a “cinnamon roll” to munch on with breakfast, so I decided to try it! There was a can of crescent roll dough in the refrigerator begging to be used, so out it came, for this delicious recipe!

We LOVE my homemade cinnamon rolls, but they take quite a while to prepare because of time necessary to let the homemade dough rise, etc. When you want the taste of a cinnamon roll, but without the fuss and effort, these cute little cinnamon roll crescents are the way to go!

We were having scrambled eggs and some bacon that I cooked in our oven, and I wanted something quick, easy, and yummy to serve with it. This was the perfect accompaniment, and we loved these cute little cinnamon roll crescents! They only take a couple minutes to prepare, and then they bake for only 9-12 minutes!

How To Make Cinnamon Roll Crescents

The first thing you need to do is mix up the cinnamon roll filling! Easy! Simply mix together some brown sugar and cinnamon in a small bowl, until combined. DONE! 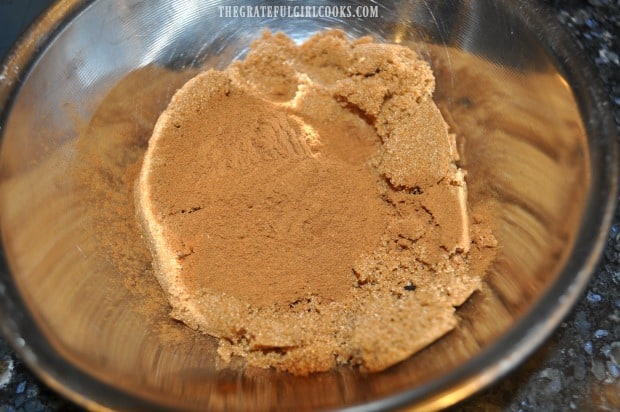 Grab a can of refrigerated crescent roll dough out of the fridge. I used this kind, which has the dough for 8 crescent rolls in it. 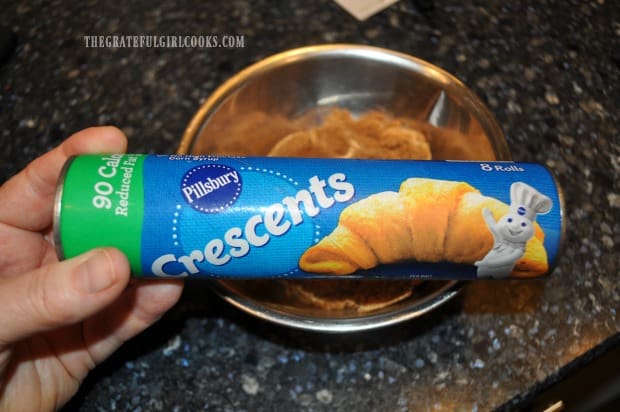 Separate each of the crescent rolls at the perforations, then lay them on a 13 x 9 inch ungreased baking sheet, about an inch apart. NOTE: You can also make them and roll them, THEN put them on the baking sheet, if desired.

Sprinkle the entire surface of each dough triangle with the filling mixture. Yes… it will be a bit messy, and yes, it will fall all over the baking sheet. No worries. Just scoop up as much as you can and dump it right back on top! Gently press down some of the filling onto the dough.

NOTE: You will most likely NOT use all of the mix. You can see in the photo below how much I had left AFTER completely covering the dough! Store the extras for next time! 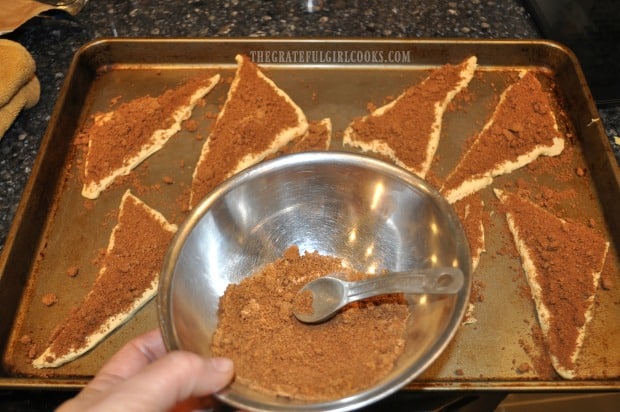 Now roll up the cinnamon roll crescents. If you can, roll each one up, beginning at the short side, and roll toward the tip of the triangle, but no worries! You can see in the photo below how mine weren’t that “pretty” or even moderately fashionable. This particular can of dough was pretty decimated when I took it out of the can. Trust me… it doesn’t matter!

Simply roll them up and tuck the end point under. Yes… again, some of the filling will fall out as you roll. I just scooped up what I could, and sprinkled it right back, on top! I used a pastry brush to clean up and remove the extra filling on the pan. 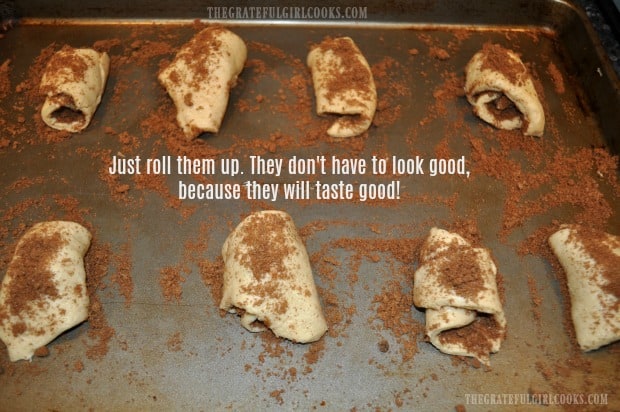 Bake the cinnamon roll crescents in a preheated 350° F oven, for between 9-12 minutes. Since oven temps vary greatly, be sure to check on them around 8-9 minutes.

When done, the cinnamon roll crescents will be golden brown on top (and will sure smell good!). Transfer the crescents to a wire rack, that is positioned on top of wax or parchment paper, and let them cool. The paper underneath will catch the drips when you glaze the crescents later. 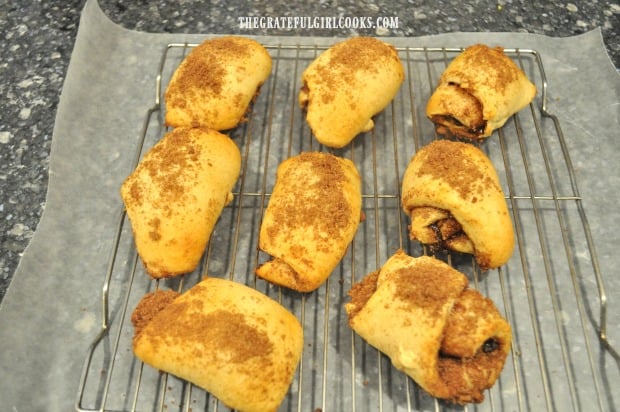 While the cinnamon roll crescents cool, mix together the glaze. Whisk together powdered sugar and heavy cream (or milk) in a small bowl, it reaches your desired consistency. 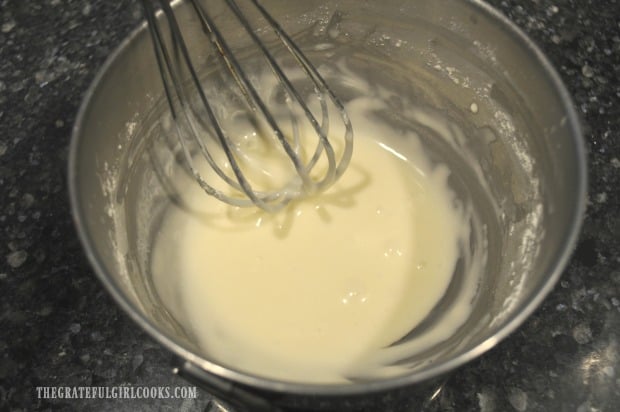 Lightly drizzle the glaze over the tops of the cinnamon roll crescents once they have cooled down a bit. The wax (or parchment) paper placed under the wire rack will make your cleanup a lot easier!

The glaze will firm up very quickly, and then the cinnamon roll crescents are ready to serve! Aren’t they CUTE? You can see the glaze on top, and all that cinnamon and brown sugar filling in every bit of these decadent breakfast treats! 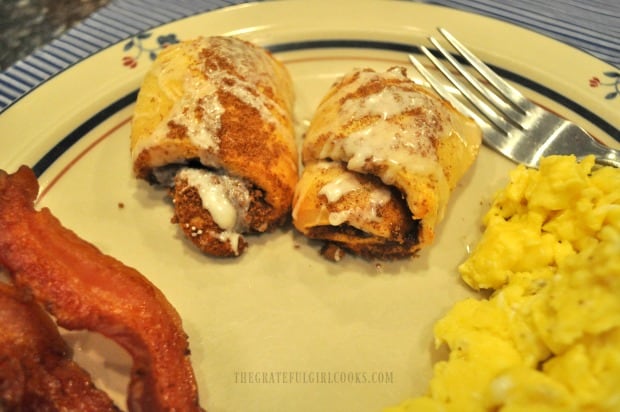 I truly hope you will consider trying these super easy and quick cinnamon roll crescents. They are absolutely delicious, and I am confident you will enjoy them as much as we did! Have a wonderful day, and may God bless you.

You can find all of my recipes in the Recipe Index, located at the top of the page. A few other breakfast recipes you might be interested in trying include:

Thank you for visiting this website. I appreciate you using some of your valuable time to do so.  If you’re interested, I publish a newsletter 2 times per month (1st and 15th) with all the latest recipes, and other fun info. I would be honored to have you join our growing list of subscribers, so you never miss a great recipe!

There is a Newsletter subscription box on the top right side (or bottom) of each blog post, depending on the device you use, where you can easily submit your e-mail address (only) to be included in my mailing list. 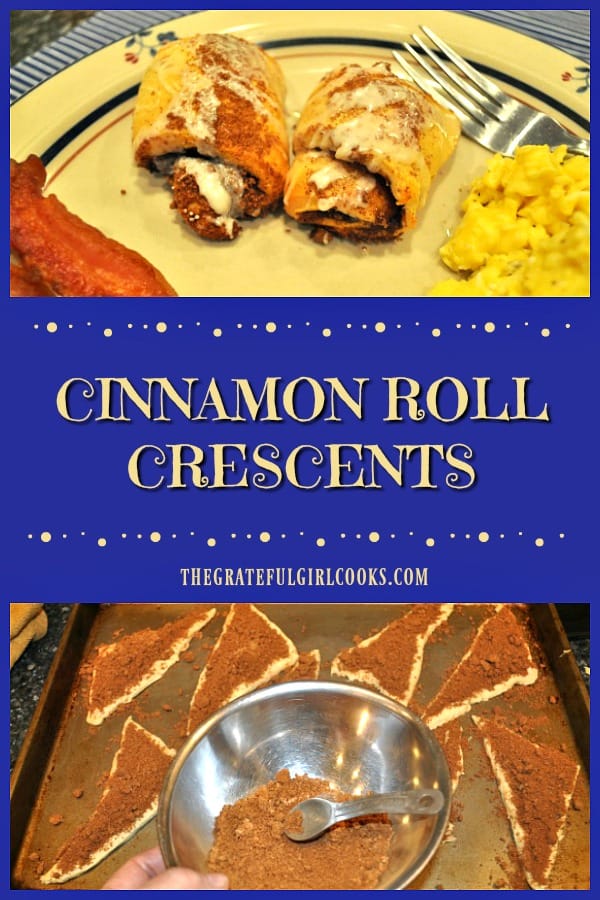