Looking for a yummy breakfast treat? Try glazed homemade cinnamon rolls! Nothing says “comfort food’ like a warm, made from scratch cinnamon roll! 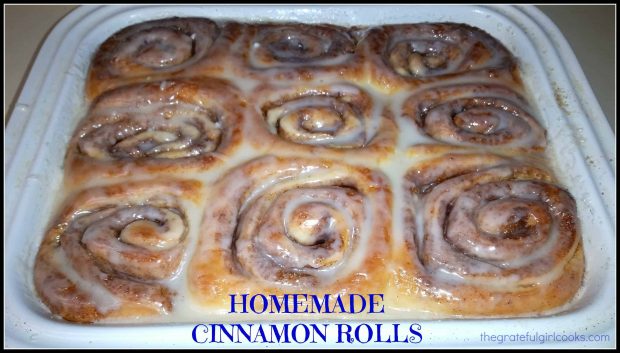 We had a dear friend staying with us from out of state last week. One morning for breakfast I made these Homemade Cinnamon Rolls, for an extra “sweet” start to the day. I LOVE cinnamon rolls, but don’t eat them too often! When I DO make them, they are a real treat, especially with a steaming big cup of Italian roast coffee.

I’ve made these cinnamon rolls for several years now, and am finally putting the recipe on my blog. This recipe makes 9 good sized cinnamon rolls, and they are delicious! I made a glaze to top this batch of homemade cinnamon rolls with, but in the past have also made a cream cheese frosting, which is equally delicious!

Do I Have To Have A Bread Machine To Make Homemade Cinnamon Rolls?

Why Does It Take So Long?

Good things (especially dough) take time! If you’ve never made cinnamon rolls before, don’t be scared off by the “prep time” involved. Most of it is waiting for the dough to rise, so you could read an epic novel, paint your nails, or call a friend while you wait. Trust me.

The dough is mixed (by machine or hand), and then the dough rises. After the dough has finished rising, it is rolled out into a 18×9 inch rectangle. 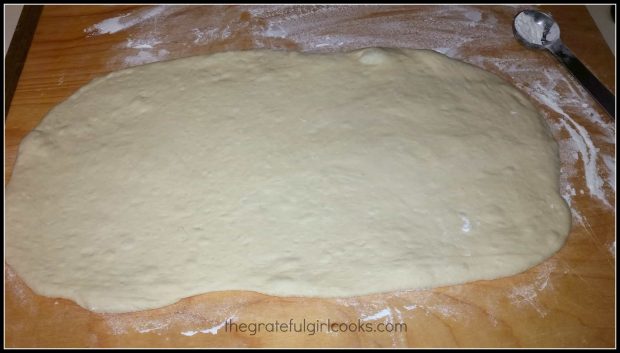 Spread softened butter onto the surface of the dough, then cover with a cinnamon-sugar mixture. Tightly roll the dough up tightly into a long long shape, and tuck the ends in, to seal. 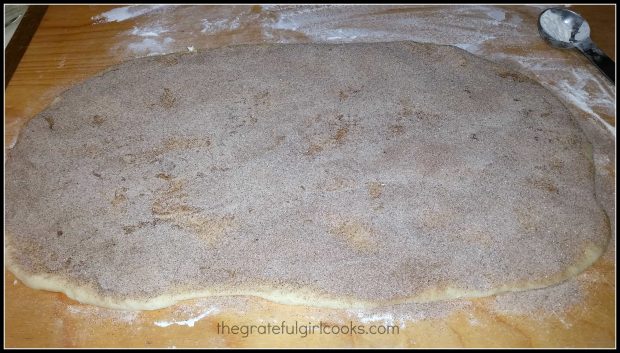 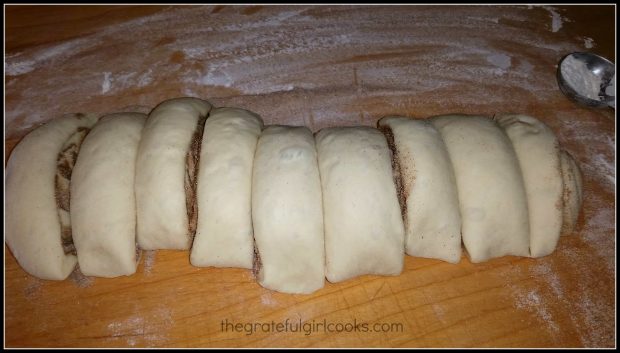 Place the slices, cut side up, in a prepared baking pan. Cover the pan, and let the dough rise again. 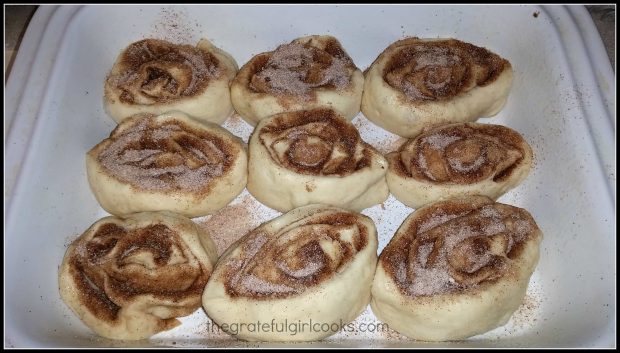 Once the homemade cinnamon rolls have doubled in size, they are ready to bake! 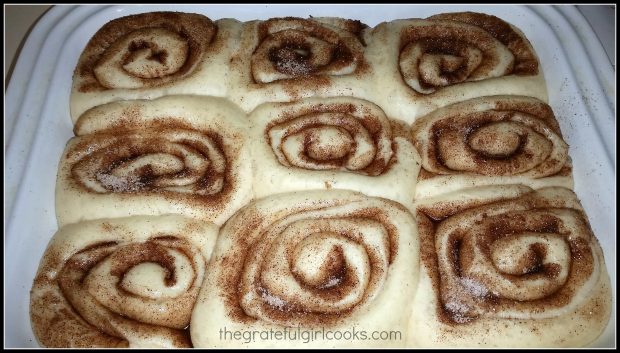 The homemade cinnamon rolls bake for 25-30 minutes in a preheated oven. Once done, a simple glaze is spread over the top of the rolls. 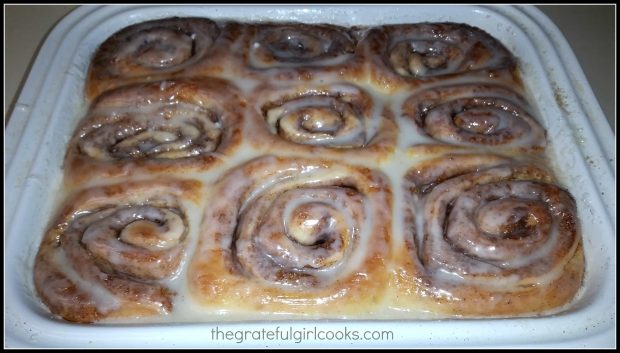 Here’s what one of the cinnamon rolls looks like on a plate. Each layer inside is coated with cinnamon, sugar and butter, and boy, are these rolls delicious! 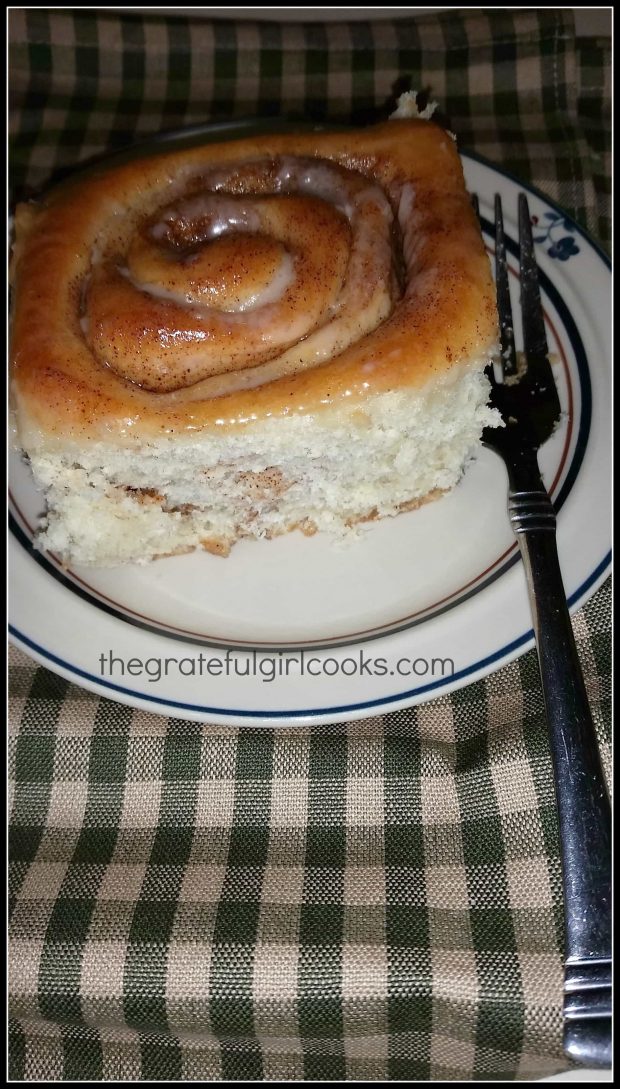 Hope you will give this recipe for homemade cinnamon rolls a try. It is very economical to make these decadent treats, considering the cost of store-bought pastries these days.  Enjoy!

You can find all of my recipes in the Recipe Index, located at the top of the page. A few decadent treats we occasionally have for breakfast include: 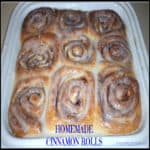 Looking for a yummy breakfast treat? Try glazed homemade cinnamon rolls! Nothing says "comfort food' like a warm, made from scratch cinnamon roll!

To make by hand: Dissolve yeast in warm water in lg. bowl. Add/mix in the butter, egg, flour, sugar and salt. Mix well. Knead dough into a large ball on lightly floured surface. Spray a large mixing bowl with non-stick spray. Place dough ball into bowl. Turn dough over to coat with the spray. Cover dough with tea towel. Let rise in warm place for about an hour until doubled in size. Proceed with rest of recipe, beginning at Step 2. 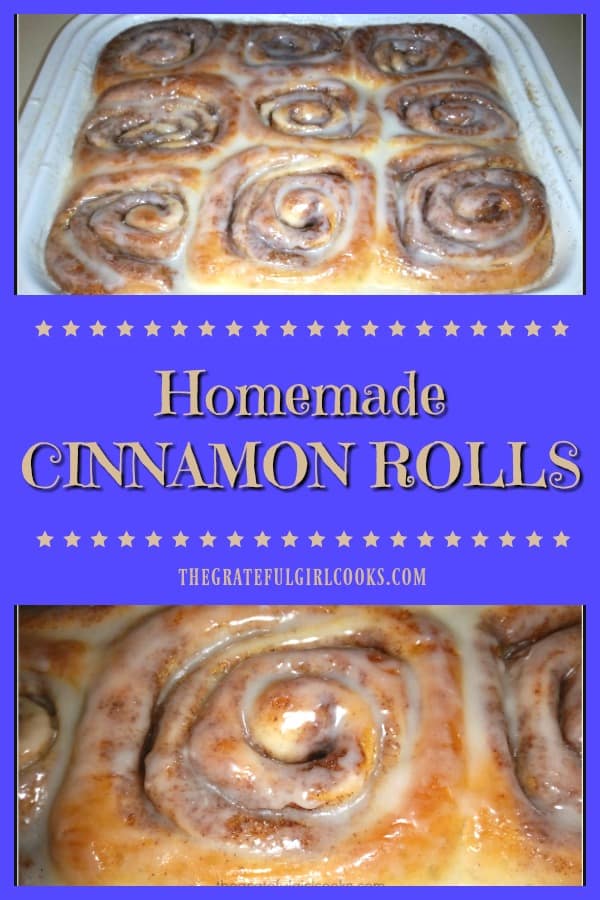