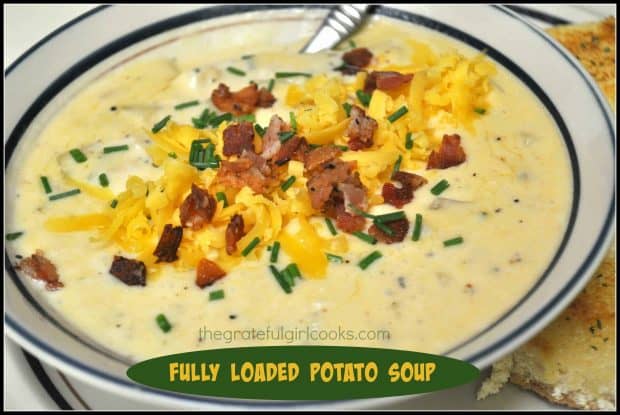 Do you love to make soup when it is cold outside? I sure do! One of the things I love about the crisp and cool weather in Fall is making Potato Soup… Fully Loaded Potato Soup!

Fully LOADED Potato Soup is packed with all the good things you would stuff a baked potato with, given the chance. Bacon, cheese, chives, sour cream… well, you get the picture! A hot bowl of this flavor-packed potato soup on a cold day is just what you need to satisfy a growling stomach.

Trying Out This Soup Recipe On Friends

A couple of years ago I had about 9 ladies from a Bible Study group I was in, over for lunch. I made a big pot of fully loaded potato soup. No recipe was used, I just put it all together (had made it many times from scratch!) and it was wonderful! I received several compliments on the soup. My friend, Judy asked me where I got the recipe, and told her I just made it up as I went along. I couldn’t even give her the recipe because I didn’t write anything down as I cooked. Epic FAIL.

Sooo… it’s now two years later and I finally remembered to document with PHOTOS the making of this delicious and filling, fully loaded potato soup. I made a big batch recently on a rainy, cold, dismal day (aren’t those the BEST days for making a big pot of soup?)

It’s easier than you think to make fully loaded potato soup… and IT IS YUMMY! Perfect for a cool evening’s meal (very filling) and lunch leftovers the next day! Hope you will give this recipe a try… I am confident you will LOVE it! 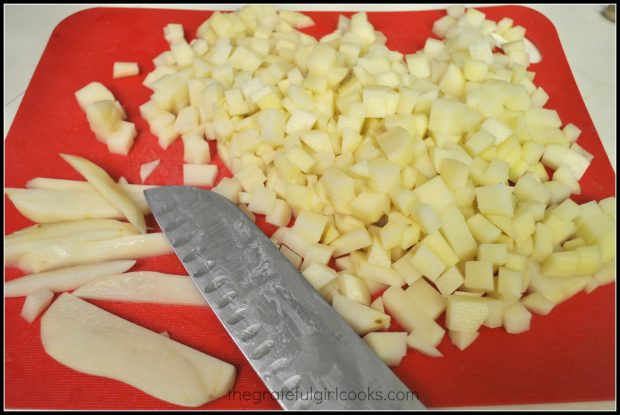 Cook the potatoes with green onions, salt, pepper, and part of the bacon pieces until the potatoes become tender. Let me tell you, it sure smells GOOD, because of those onions and bacon! 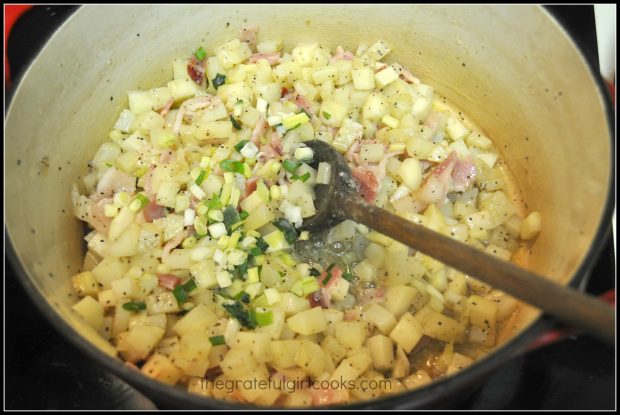 Add a little bit of flour to the cooked potatoes. The ingredients will continue to cook and soften. This flour will act as a thickening agent for the fully loaded potato soup, making it thick and creamy! 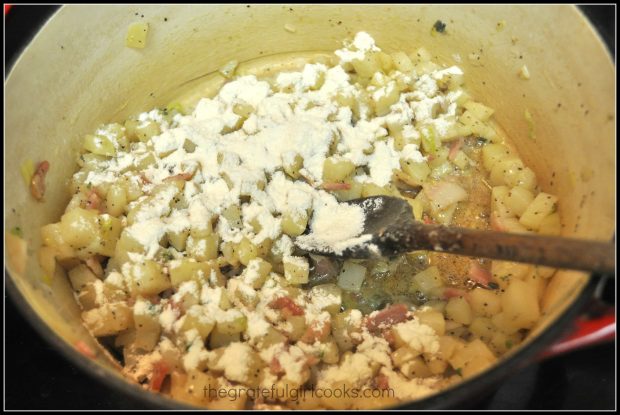 Time To Turn The Ingredients Into Fully Loaded Potato Soup! 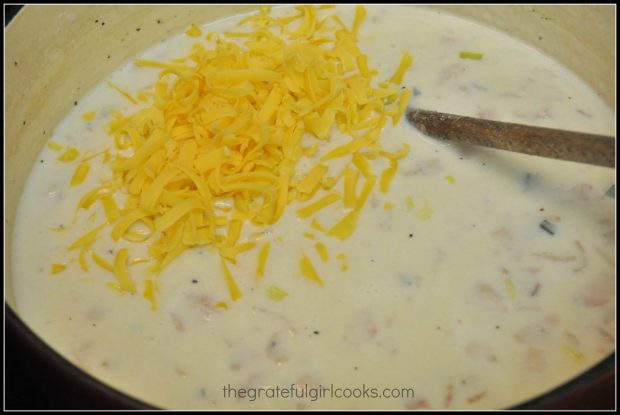 Here you can see the thickened fully loaded potato soup, with the bacon and potato chunks! It looks so good, but is not quite finished! 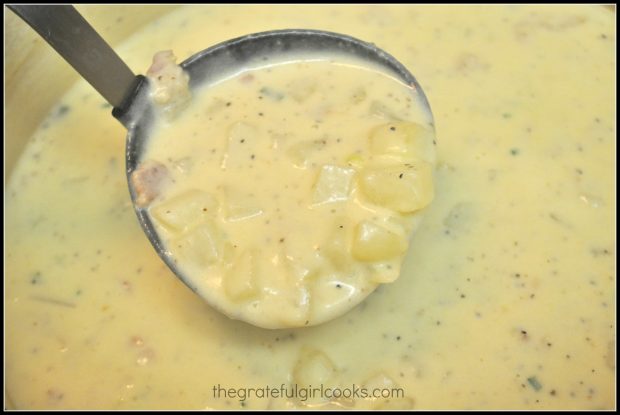 Right before serving, stir sour cream into the hot, thick fully loaded potato soup! The sour cream will add yet another layer of flavor and creaminess to the soup. 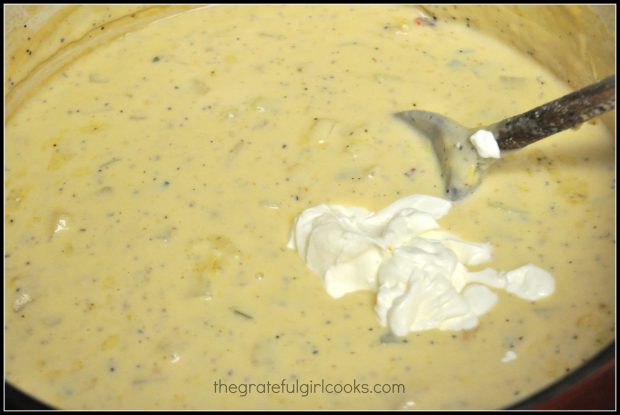 Ladle the hot, fully loaded potato soup into individual serving bowls. It looks good just like that, but the garnishes for the soup is what helps put it over the top! Garnish each bowl of soup with crispy bacon pieces, additional cheddar cheese, and chopped chives. That REALLY pretties this soup up, and adds even more flavor! ENJOY! 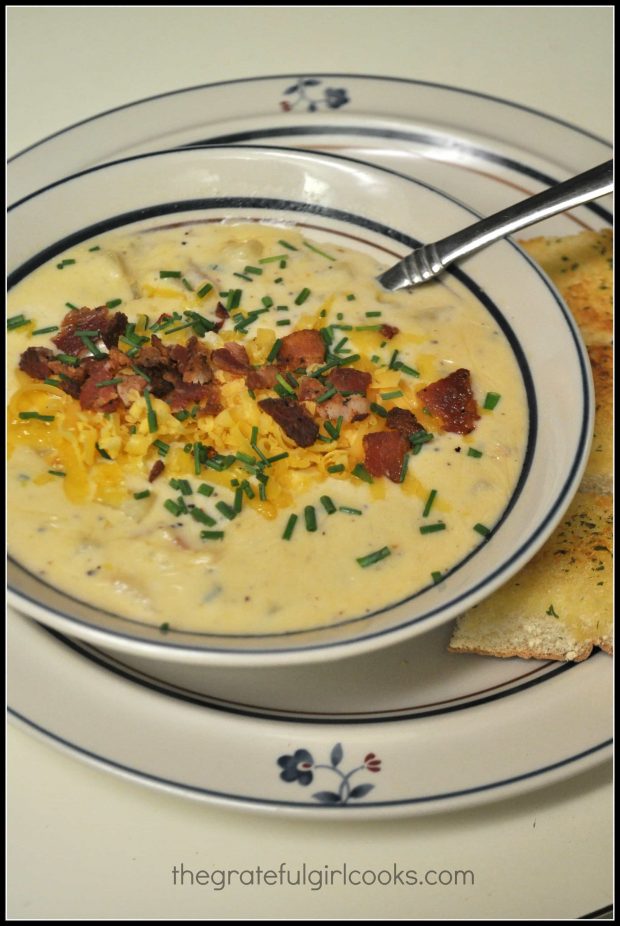 This fully loaded potato soup is one of our family’s all time favorite soups. I hope it will become one of your favorite soups, too! Have a great day!

You can find all of my soup recipes in the Recipe Index, at the top of the page. A few of our favorites include: 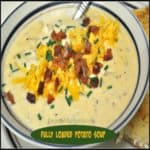 **I usually add 2 slices of halfway cooked bacon to the soup pot to cook with the potatoes for extra flavor, BUT If you prefer, you can cook ALL the bacon until crispy. Add all but one piece to the soup at one time (saving one slice to crumble for garnish!) 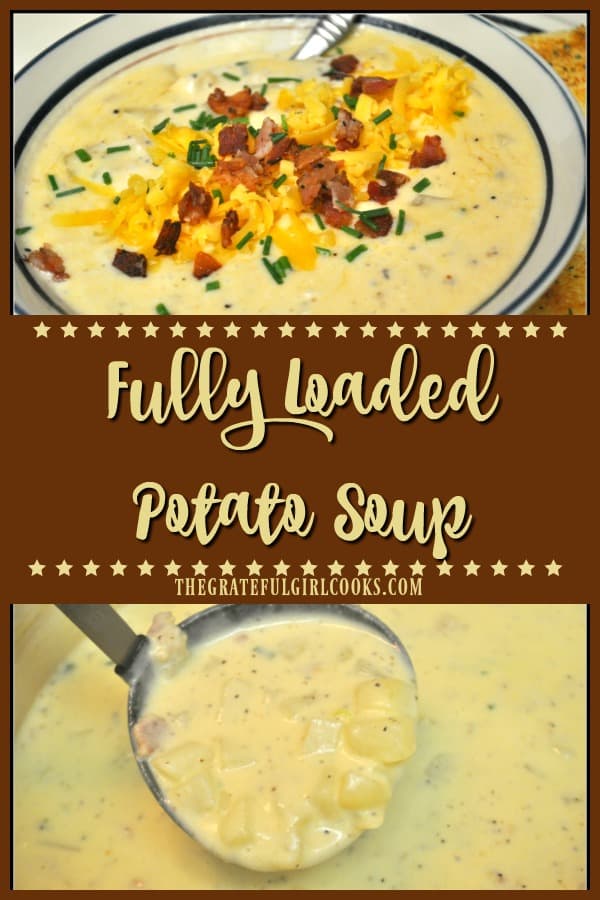